Why a web site for Hibriten Mountain?

While I believe I tend to be a bit selfish at times, this story is not about me. It’s about the journey upon which I’ve unexpectedly been set. It’s a journey that started long before I got involved.

I even debated about putting this information within the site, but I found myself explaining much of this excursion to folks while researching, or simply in conversation at the gym or over holiday.

I only mean to illustrate how this came to be; how it started from one idea and grew to another; and the wonderful folks so willing to contribute information, time and resources. They wanted the mountain’s story told, too.

They understood there’s a bigger network of experiences that need to be told and remembered.

The reason for this site’s existence is a multi-faceted answer.

Around early summer of 2014, I was loosely researching on purchasing a drone for aerial video and photography. My company, Chad Austin Inc. (shameless plug), focuses on web development and marketing, but within that arena that comes a working knowledge of all types of media: graphics, audio, photography, video, etc. I figured, “hey, I just need to learn how to fly the thing and I can do this.”

But I was not totally sold. Not yet.

July 1st, 2014: I lose my father, Jerry Austin, due to complications from cancer surgery recovery. This horrible loss was devastating; a loss with which I’m still trying to cope. And when things in my life get tough, I immerse myself in work. It keeps me from thinking too much about other things, you see.

So I continued the brainstorming on the aerial video ideas. I needed something; something that would allow me not just film, but create an experience for the End User. However, I still had to be true to me: I had to be interested 110% in whatever subject matter was at hand.

For several months, the answer alluded me.

I play in a cover band called the Logic Band. Our last original album, “The Id and the Ego,” was released in October, 2010. The promotional single “Ms. Nevertake” was to have an accompanying music video. Originally, the storyboard, or preliminary video outline, was to be shot with scenes from the hand glider ramp on Hibriten Mountain.

The year 2015 marks seventeen years of the Logic’s existence. We were planning on this big promotional push this year that included a new web site. I was looking through all the material gathered over the years, when I came across the original “Ms Nevertake” storyboard. As soon as I saw the references to Hibriten Mountain I knew I had found my inspiration. 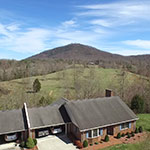 The Mountain is every where.

So I posted a question on Facebook, asking folks who was in charge of the mountain, who maintained the star/cross and such.

The response was immediate and overwhelming. Apparently, the mention of the mountain brought back a lot of positive thoughts and memories for folks.

I learned the Lenoir Moose Lodge Chapter was responsible for the star / cross structure.

I had names. I had phone numbers.

During this online response ‘phase’, I was reminded how Dad used to save every newspaper clipping about the mountain and show it to me upon visiting as an adult.

When I was a kid, we got excited talking about the mountain. We would take a telescope to the end of the neighborhood (we lived in Lower Creek) and watch hand gliders take off from the ramp, people in the Fire Tower, and, of course, the star and cross structure.

Going to school every morning, we could see a beautiful view of the mountain.

I remembered seeing both star and cross lit at the same time, a rare, but comical occurance. I saw the structure ‘turn on’ at dusk many times. I even witnessed it turning off on a few early mornings.

It was an endless source of fascination for me.

Like many folks in and around Lenoir, Hibriten Mountain is ubiquitous, even omnipresent. 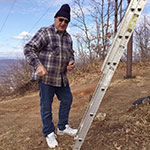 Once I started digging for more information about the mountain, I soon learned about a fellow named Richard Gardener.

Richard, it seemed, had been caretaker of the Star / Cross structure for several decades, climbing up and down the construction, changing out bulbs and wiring.

But as soon as I witnessed him doing the maintenance, I realized he was giving his everything for everyone else’s enjoyment and fulfillment. He would climb up the structure like a fly would climb a wall. He was so daring that I had to look away at times.

But he was fearless. And it was quite clear that he was driven by not only by his unselfish motive, but also by a deep understanding as to how much this meant to the community that had witnessed its existence for decades, as well as those who were just discovering it for the first time.

So over the months from December 2014 to March 2015, I have researched information and quizzed people about their knowledge. I’ve been up and down the mountain a few times and I’ve interviewed a bunch of folks. The immensely rewarding research made one thing clear: while definitely a landmark in the physical world of Lenoir, Hibriten Mountain needed its own landmark in cyberspace, too.

This web site allows everyone to share and enjoy the magic on the mountain. My father would have loved it, I’m sure, as much as I have putting this together.

I hope you enjoy discovering and remembering as well.