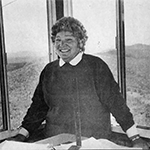 Dorothy Dellinger. Picture appeared in the Lenoir News-Topic on November 5, 1987.

No longer in service, the Fire Tower was built in 1927.

One of the last people to work in the tower was Dorothy Dellinger. There is a great article about her, published on November 5th, 1987 in the Lenoir News-Topic, that you can view here. 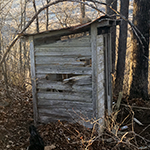 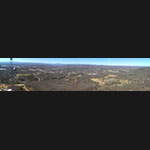 The fire tower still stands as a familiar sentinel, followed by a whole myriad of radio and cell towers. The fire tower’s base is surrounded by a recent installation of barbed wire fencing. But for years this fencing did not exist, and folks would climb as high as the door leading into the tower’s cabin, and enjoy the awe from a view above the crest of the mountain’s canopy.