The Star of Hibriten Mountain made its debut during the 1954 Christmas season, and the cross the following Easter in 1955. 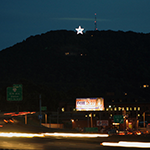 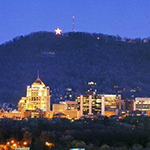 Inspiration for the lighted structure came about from L.G. “Buck” Rhodes, the 1954 governor of the Loyal Order of the Moose. Rhodes had visited his sister in Roanoke, VA, and seen a similar structure, known as the Mill Mountain Star. He was in charge of leading the Moose members in projects each year, and when he saw the Roanoke star, he felt inspired to bring the idea to Lenoir and Hibriten Mountain.

Rhodes himself designed the structure on his dining room table. He, along with Blue Ridge Electric foreman Gene Walker and a gentleman named Glenn Kirby, installed the 90-foot poles and wiring and bulb placement. Wade Walsh was the “care taker” until Richard Gardener took it over in 1990. 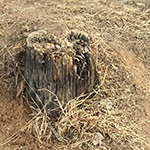 One of the original pole stumps.

The original structure wasn’t completely symmetrical: the right side was shorter than the left. The structure was rebuilt correctly in 1989 after Hugo, with the wooden poles being replaced by a metal framework.

Rhodes’ original blueprints were kept at the Moose Lodge until they were lost from a fire in the 1970’s.

The star and cross of Hibriten Mountain has provided enjoyment, wonder and inspiration for generations. Even pilots have used the star and cross as guidance when flying from Tennessee over the mountains.

Material for this story was provided by Lenoir News Topic clippings kept at the Caldwell Historical Museum.